Sometimes I feel acutely aware of the privileges of my job. Like when I get to spend a few days in the Galapagos Islands as part of a media trip to Ecuador. Yes, my travelling life has started up again and although I'm trying to fly less (this is my first overseas trip since January), I couldn't pass up a chance to see this place I've been daydreaming about since I was a kid.

It's every bit as amazing as the documentaries show it to be - including the recent BBC one, The Islands the Changed the World, narrated by the divine Tilda Swinton. And even though we only had three days, there's so much wildlife it was almost overwhelming.
The animal-spotting started pretty much as soon as we landed (the Galapagos are about 1000km and a two-hour flight from Guayaquil, on the coast of Ecuador); waiting for the zodiac to pick us up and transport us to our waiting ship, the 40-passenger Isabela II, run by Ecuadorian tour operator Metropolitan Touring, we almost tripped over Galapagos sea lions on the dock, while brown pelicans and frigate birds swooped and dived around us.
About 30,000 human beings live in the Galapagos but most of the islands are inhabited only by strange and wondrous creatures. Flightless cormorants, tropical penguins, marine iguanas that dine on algae on the sea floor and sneeze saltwater when they surface. Land iguanas that eat cactus pads. Blue-footed boobies whose large webbed feet really are bright blue and who performed their mating "dance" right in front of us, on the walking track (see my video clip). All the wildlife we encountered seemed oblivious to us, in fact, a good sign.

Every day we went ashore twice, in the morning and afternoon, and every landing brought new things. Waved albatross courting (which involves a lot of burring sounds and clacking of their long beaks; they mate for life and can live for up to 60 years). Little lava lizards (the islands are volcanic after all) doing mini push-ups  to mark their territory. Pink flamingos and Galapagos penguins, both of which we saw; Floreana Island, in the south, is the only place in the world where they co-exist.

And giant tortoises that can weigh 220kg! Rumour has it a tortoise called Harriet that died at Australia Zoo on the Sunshine Coast in 2006 was brought to Australia by none other than Charles Darwin, back in 1835. She lived to the grand age of 175. 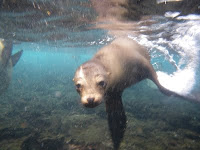 The highlight of highlights? Swimming with sea lions (this link goes to another video clip), for an hour (which felt like five minutes), as they sped around us like torpedoes, blowing silver bubbles, zipping and diving and surfacing. It was exhilarating and a little scary at times (some of the mother sea lions are big, and have big teeth) but unforgettable. In fact I'm still reeling from all the back-to-back-to-back experiences we had on the four islands we visited in such a short time. More later...
1 comment: