I love to travel. The further away, the better. By plane of course - sure, the journey is the destination but, I mean, you've got to get there. It goes without saying that there are carbon offsets involved. But who doesn't love a dose of armchair travel now and then? The kind where you see the world through someone else's eyes. Could there be sweeter union than the one between travelling while remaining firmly planted in one's armchair (or swivel chair in front of a laptop) and one's love of the environment? I think not.

On this note, today's post is an ode to Louise Hawson, travelling photographer. If you live in Sydney, you might know about her 52 Suburbs project a couple of years ago - every week she and her camera explored a different suburb of Australia's largest city, posting the results in a blog that became an exhibition that became a book. (Beware, name-dropping ahead: Louise and I were in the same year at school. Fancy that.)

Now she is far away, taking in the unsung suburbs of other cities around the world: she's been to Hong Kong, she's in Delhi now, and she'll be spending the next few months travelling through Istanbul, Paris, Berlin and New York - all with her 8-year-old (and highly photogenic) daughter Coco in tow. Sign up for her weekly updates at 52 Suburbs Around the World. Her images will brighten your day/week/year. 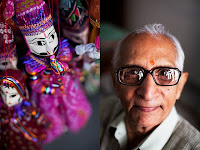 See what I mean? And it's not just the images that are wonderful, but her observations that accompany them.They really make your laptop/iPad into a window on the world. No carbon offsets required. Enjoy...
1 comment:

Newsflash: The Sydney Morning Herald has just published my story on one of the wildest, most off-the-map places I've ever been - Madagascar. Read it here, and if you'd like pics with that, see the online photo gallery.

In other news, a few days ago I rode my bike to the Australian Museum, in the rain, to see the latest Wildlife Photographer of the Year exhibition.

I try to go every year, and every year I am inspired and usually moved to tears by the beauty and poignancy of what's called the Oscars of nature photography. It gets more than 40,000 entries, from 95 countries, and each year only about 100 are featured - so they're pretty special.
I like the quiet of the exhibition (notwithstanding a few un-quiet children this time) as people peruse the framed and spot-lit images, reading about how they were taken, and about the animals – their habits, where they live or migrate to, whether they are endangered.
A swimming polar bear, a hummingbird mid-wingbeat, a rare white humpback whale. There are penguins on ice (where else?), a chimp asleep in its mother’s arms, a cheetah family in the branches of a long-dead African tree.

A hippo, a rhino, a fox, a snake (sounding like a children’s fable). A  photoessay of Louisiana pelicans, their feathers tarred with oil.

There are landscapes too. A stone arch with a backdrop of stars, the green shimmer of the Northern Lights, a rocky coastscape studded with red starfish.

Most incredible of all are the pics by child photographers; the under 10s must surely be as precocious as child actors, using their parents’ Nikons and Canons (or their own?) and staking out the backyard to fixate on an owl or capture the compound eyes of a beetle. I’m in awe of them too.