Today's blog post is sponsored by marine creatures great and smaller that frequent the Sydney region: whales, penguins, dolphins and sea lions. Wait a minute..."Sea lions"? A couple of days ago, I wouldn't have thought to include this pinniped (my word of the day) but now I know better. 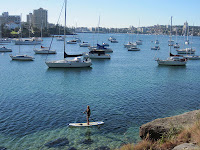 On Saturday, while stand-up paddleboarding in Sydney Harbour, I saw a sea lion, sunning itself on a marina right across the water from where I live. I’ve never seen one here, never even heard of them coming into the harbour and at first I thought it was a dog.

I did a double-take and sure enough, there was the thick neck, the pointed nose, the lithe figure as it slinked into the water and was gone...Could it be an endangered Australian sea lion, usually found in south-western Australia? I paddled on, and glancing back saw that it had returned to its sun-spot between the boats. It just goes to show: you don’t have to live on Macquarie Island to have a sea lion in your backyard.

Then this morning, just as I was sitting down to work, I got a text message from my dad: “Whales out your window”. He lives up the hill from me, and we share a view of the harbour which, today, included a cluster of boats, including a tall ship and the Manly Ferry, loitering between North and South Head to ogle a couple of humpbacks at the entrance to Sydney Harbour on their way north from Antarctica to Queensland.

My feline friend Kaiser died last year - I know, it's not very no-impact of me to have had a cat but in his defence, he wore two bells and in his twilight years was as mellow as a monk (i.e. not a hunter of native birds and mammals). I still miss his gentle soul, but lately I’ve been noticing how many wild animals we share this big city with:

Seagulls snoozing with their heads tucked under their downy wings on the beach. Pelicans soaring in formation high in the blue sky. Carpets of sulphur-crested cockatoos feeding on a cache of seeds. Stingrays on the sandy sea floor, below my surfboard. Sharks - I saw five (small ones) while swimming between Manly and Shelley Beach. A brush-tailed possum (below) that came aknocking one night last week, probably tempted by the little berry-like wreath that decorates our back door. 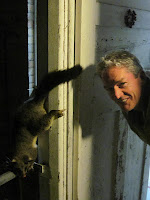 And here's a brief clip of some dolphins we saw in North Harbour (shot by Craig, again from his paddleboard, last week).

While we're on the subject of animate things, let's not forget the insect world. I had ants in my laptop a few weeks ago. Some vigorous drumming on the keyboard (when I wasn't even on deadline) shook them loose. And what about plants? And why not non-living natural things: rocks, the sea, the ground itself...

We need them all, to remind us what's important - that, whether we're aware of it or not, we are all part of the natural world, sea lions included.

Last weekend I spent the sunniest part of a whole day in my own backyard - and it was one of the most enjoyable Saturdays I've spent in a while.

I met a whole bunch of friendly neighbours I'd never seen before. Talked about waves with a couple who bought one of my surfboards and a copy of my book Surf's Up: The Girl's Guide to Surfing (pardon the plug). Chatted with neighbours I do know, who popped in to say hello. Gave away brownies I'd baked the night before. Got rid of some pretty good stuff that other people wanted more than I do. Oh, and I made a few bucks in the process. 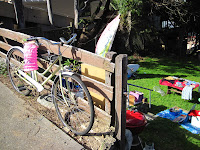 All thanks to the Garage Sale Trail - a Bondi-based initiative started in 2010 in the name of "sustainability, community and creativity" to encourage people to offload things that might otherwise go to landfill. That first year, there were 130 garage sales across Sydney. Last weekend, there were 6000 garage sales across Australia - pretty cool, huh? You can register your sale (and give it a name, like The Man Sale or Brownies in the Backyard) and people find you online or on their phones as they wander around your suburb. 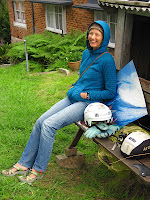 I don't think I've ever spent a whole day in my own backyard. An afternoon, sure. A morning having breakfast and reading the paper in the sun, certainly. This was different. I liked the commitment of it. Stay. Go nowhere. Be here for whomever walks in through the gate. Greet them with a brownie (my favourite part).

There's something to be said for sticking with one thing, one place, particularly at a time when it's easy to feel paralysed by choice. Next weekend I might try staying somewhere else all day, switching off my phone and just being, well, there. 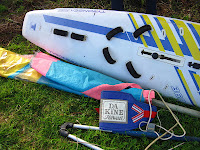