Sorry to have been absent from this page for a bit. I've just spent the last few weeks under a rather large deadline and have only just emerged, blinking, into the light again. The no-impact project is still part of my life, just not quite as intensely as before, because, well, it’s winter and I’ve been at home (except for a brief stint in the tropical Cook Islands).

Sure, Sydney’s winters are balmy compared to many in the world, but I confess to consuming more (albeit offset) electricity these days, what with the short days, cold nights (hello, oil heater) and the necessity of hot chocolates and toasted sandwiches and soups and endless cups of tea. Bring on spring…

But that’s not what I wanted to blog about today. I want to rave about an incredible book – A Sense of the World by Jason Roberts – about an incredible traveller, a blind traveller. James Holman (1786-1857) was, as Roberts writes, “the quintessential world explorer: a dashing mix of discipline, recklessness and accomplishment…In an era when the blind were routinely warehoused in asylums, Holman could be found studying medicine in Edinburgh, fighting the slave trade in Africa…hunting rogue elephants in Ceylon, and surviving a frozen captivity in Siberia”. Charles Darwin even cited him as an authority on the fauna of the Indian Ocean, in The Voyage of the Beagle. 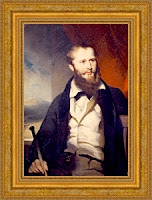 By October 1846, the Blind Traveller, as he became known, had clocked up a quarter of a million miles, more than any other person had travelled, ever, and in an age when steam-powered vehicles were more of a novelty than a practicality. There’s no record of him having taken any trains, says Roberts. Holman travelled the old-fashioned way: “on foot and on horseback, in whatever passed for a carriage or a cart, and in vessels driven only by the wind”.

He “could claim a thorough acquaintance with every inhabited continent, and direct contact with at least two hundred distinctly separate cultures…Alone, sightless, with no prior command of native languages and with only a wisp of funds, he had forged a path equivalent to wandering to the moon.”

Being a travel-lover myself, what amazes me most is how Holman managed to get around and to thrive on the unpredictability and newness of journeys to far-flung lands. Apparently he used the sound of his walking cane and his shoes, and his horses’ hooves, on cobbled streets to get a sense of his surroundings – a “human echolocation” technique now being used by other intrepid people (many keen mountain bikers and hikers) who also happen to be sightless, thanks to World Access for the Blind.

Imagine travelling the world without the aid or privilege of sight. Imagine not being able to look at something beautiful and soak it in through your eyes. But Holman confessed in his writings (he was the author of many travel narratives) that his most profound experiences left him feeling not blind, but mute:

"On the summit of the precipice, and in the heart of the green woods…there was an intelligence in the winds of the hills, and in the solemn stillness of the buried foliage, that could not be mistaken. It entered into my heart, and I could have wept, not that I did not see, but that I could not portray all that I felt.”