A monkey at my table - week one in Ubud, Bali

A few days ago, a monkey ate my breakfast. I was sitting at a mosaic-topped table at Michi Retreat, just outside Ubud, looking across a small river valley at a hillside of terraced rice fields, when he swung down from the roof, island-hopped between tables and helped himself to my bowl of fruit salad and yoghurt.

While I ran to get Michi's chef, Iluk, hoping she’d have more success than I’d had at shooing him away (he just bared his two-inch canines at me), the monkey shook the flowers out of a nearby vase and raised it to his lips like a flagon of wine.

I could have sworn he wiped the back of his hand across his lips (or is that my imagination talking?) before disappearing into the bushes below.

That’s life in Ubud - where nature is lush and on the loose - even when you're nowhere near the famous Monkey Forest.

Michi Retreat, which I booked on Airbnb and where I’ve been for just over a week now, is about 10 minutes by scooter from Ubud’s hubbub, which is one of the things I like about it (its proximity and distance from Ubud).

It’s quiet - except for the sounds of the local village, Jukut Paku, in the morning and at night. Seems there's always something going on: chainsaws at dawn (cutting wood for carvings), the same Indonesian pop song played loudly over and over, weddings that go on for days.

A few nights ago, the warm night air was alive with the haunting sounds of a "gamelatron” - a robotic gamelan orchestra in Michi's art gallery that had been left on after a blackout earlier in the day. I didn't mind; it reminded me where I am.

Michi deserves a blog post of its own (coming soon) but I will say this: it’s like nowhere else I’ve ever stayed. Built more than a decade ago as a retreat for artists, writers and other creatives, it’s a work of art itself, an endearing shambles of Buddhas and frogs and mermaids and themed rooms and collected things from around the world.

And it has a beautiful pool - if I can't be near the sea (Ubud is about two hours from Bali's south coast), I can at least swim every day. 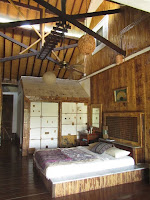 My room, Hotaru (it means “firefly” in Japanese), is a little Japan of bamboo panels, shoji-screen walls and a balcony.

I fall asleep with the overhead fan quietly whirring, wake up to the morning sun on the stone Buddha head on my balcony and, beyond, the rice paddies and palm trees.

In the absence of a real home (is it really only two weeks since I moved out and dropped out of Sydney life?), I feel surprisingly at home here.

The plan is to stay a month in or near Ubud, on a self-imposed writing retreat. Only I haven't done much writing so far.

It's hard to resist the siren call of this steamy green and wholesome place. And there have been so many interesting people to talk to or to go into Ubud with for lunch or a yoga class, most of whom I've met at Michi. It's like an enormous, multi-national share-house that way.

There's Alfonso, the thoughtful Spanish surfer and IT guru who works here. Dominika the gentle soul from Slovakia who lives in London. Dipesh from Mumbai, now based in Singapore, who's into yoga and meditation. Kayleigh the fellow Piscean from California who came here for a 12-day detox.

For all my travel-writing travels in recent years, I'd forgotten how easy it is to make friends when you're on the road, particularly in a place like Ubud, Bali's earthy, arty heart. It helps that I feel friendlier and happier too, on this break from big-city life.

And I love that with barely any planning, you get to do fun things. Last Sunday, six of us piled into Michi's van for an all-day surf trip. After four hours of getting lost and checking various beaches, we ended up near Medewi, on Bali's south-west coast. As luck would have it, the beach we'd come to was in front of a posh resort, Puri Dujama. 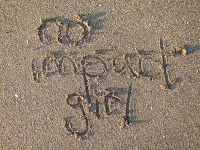 Wandering in through the "staff only" gate, we made for the restaurant (where lunch cost us $10 each instead of $5 as in Ubud) then a few of us paddled out while the non-surfers relaxed by the pool.

The waves weren't great, but we had them to ourselves, and spent a heavenly, lazy afternoon in hammocks and walking on the black-sand beach. Before leaving, we watched the sun melt into a hazy horizon, folded ourselves back into the van and began the long drive back to Ubud, and home to Michi.