I've never been in a book club. I read too slowly and for me reading is as solitary as writing and I like it that way. (Also, I don't like wine.) But if I were in one, it'd be a non-fiction book club.

As much as I love a good story, I'm curious about the world. I studied zoology and psychology at uni - when tertiary education was free and you could study whatever interested you - and I still love learning about how the natural world works, and the human mind, how people and nature interact, how to live a rich and true life.

It's not about accumulating knowledge. A good non-fiction book is like a trip to a place you've heard about but never been to.

It takes you out beyond the breakers of what you could ever know to a bottomless ocean of understanding and wonder, helping you see everything from this new vantage point and changing you in the process.

So welcome to my (virtual) Non-Fiction Book Club. Let's talk about books we've loved and learned from. I'll start.

Here are 8 of my favourite non-fiction reads this year (so far):

Sapiens: A Brief History of Humankind - by Yuval Noah Harari
Written by an Israeli historian, this is hands-down one of the most extraordinary and enlightening books I've ever read. It "spring cleans" your mind, as one reviewer put it, enlisting some of history's sisters - anthropology, biology, economic theory, theology, sociology and other disciplines - to explore where we came from, what makes us human and can "progress" make us happier?

It's astounding in its scope too, starting 2 million years ago when there were six species of humans (Homo sapiens became dominant about 70,000 years ago), passing through cognitive, agricultural and scientific revolutions (as Harari calls them) and ending with the current capitalist and climate crises. Translated from the Hebrew first edition, the writing is surprisingly clear and bold. It's a book to be read slowly, letting the ideas sink in and reframe the world we live in.

Eating Animals - by Jonathan Safran Foer
You might recognise Foer's name; he wrote Everything is Illuminated (2002) and Extremely Loud and Incredibly Close (2005). This book was his first foray into non-fiction and it's powerful. Inspired by the birth of his son and a desire to choose foods that nourish him, Foer spent three years researching how meat comes to our tables, then used his considerable creativity to craft a compelling argument for not eating animals (he became a vegetarian in the process).

Foer doesn't hold back from detailing the brutality and cruelty of factory-farming and although the book is US-centric, America is not alone in the way it treats the animals it eats, particularly at the slaughter end of their short lives. (There's a new doco, Dominion, about the way we treat animals in Australia; just watching the trailer made me cry.) A must-read for anyone who eats any kind of meat (yes, including fish). 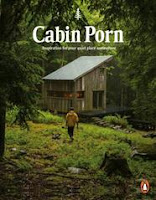 As well as 10 inspiring stories about people who have built their dream cabins, or yurts or converted grain silos, the book features more than 200 incredible cabin pics from the website (hand-picked from more than 12,000 images, and counting).

I love this quote at the start: "Inside each of us is a home ready to be built. It takes a supply of ambition and materials to construct a cabin, but the reward is handsome: a shelter for yourself somewhere quiet and a place to offer warm hospitality to friends."

First, we make the beast beautiful - by Sarah Wilson
I didn't expect to love this book as much as I did. Didn't expect to like Sarah Wilson's writing as much as I do (because she used to edit women's magazines and has become a bit of a health and wellbeing guru). But this is a beautiful book, "a new story about anxiety", hers and ours, told with unflinching honesty, curiosity and kindness.

It's a book for anyone who has ever felt a twinge of anxiety or self-doubt, and who hasn't? It's raw and real, confessional and creative, hopeful and helpful and playful, with chapters and exercises called, for instance, "back the fuck off" and "sit on a small bench with yourself". I've dog-eared so many pages, as breadcrumbs to lead me back to bits I loved, it looks like origami.

Utopia for realists - Rutger Bregman
I loved the title straight away, but didn't expect to love a book about economic theory. This bestseller by a young Dutch historian and author is about the concept of a Universal Basic Income, whereby a government gives every citizen a basic living wage (say $1,000 a month) to cover essential expenses such as food and housing, regardless of their means or whether they work or not, replacing complicated welfare systems in the process.

Bregman explains everything in such a clear and entertaining way it's fascinating and uplifting: trials in countries such as Canada and England show that when given enough money to live on most people don't just sit on the couch all day binge-watching Netflix series; they work (doing what they love) and volunteer, become healthier and more creative and community-minded.

Here's a shorter read about why UBI costs less than you think and a link to Bregman's TED talk "Poverty isn't a lack of character, it's a lack of cash".

10% Happier - by Dan Harris
This one kept me company while I was trekking in Nepal earlier this year - via my Kindle, the best way to read in teahouses and tents without bedside lamps. It's written by an ambitious American news journalist and anchorman who stumbles onto meditation after having a nationally televised panic attack, but is sceptical at first because he thinks it's all woo-woo and doesn't want to lose his "edge". So he starts asking hard questions to find out what it's all about.

I've read dozens of books about meditation, most by meditation teachers, but what makes this one fresh, funny and inspiring is Harris' matter-of-fact style and the fact that he's looking at meditation from the outside and demystifying it. He's now a convert to mindfulness-based meditation taught by the likes of Joseph Goldstein and has a website, a podcast and an app: 10% Happier: Meditation for Fidgety Sceptics.

Changing Gears - by Greg Foyster
Jo Nemeth (aka Jo Low Impact) recommended this one to me when I interviewed her last year; she found it so inspiring she gave up using money, for good, three years ago. It's about Greg Foyster, a journalist working in advertising who decides to quit his job to live more simply and sustainably.

But first, he and his like-minded girlfriend Sophie decide to ride their bikes from Melbourne to Cairns; along the way, they arrange to meet people who have chosen to simplify their lives in various ways, from tree-dwellers to barefoot monks.

The cartoon cover doesn't do this book justice; it tackles big questions about how we live, and how we could live. It also feels like two books in one: the simple-living stories they encounters, which are all fascinating, and Foyster's own joys, realisations and struggles as they head north then back to Melbourne. An inspirational resource for your inner minimalist.

Woman in the Wilderness - by Miriam Lancewood
Is there anything better than an adventure story that's true? Don't be fooled by this book's cover, the photo of Miriam Lancewood, a statuesque Dutch beauty wearing a possum-skin vest she made herself (possums being pests in New Zealand), one hand on the hunting knife in the belt of her shorts. She's the real deal.

Originally from Holland, she met her husband Peter in India and together they spent seven years living simply and close to nature in the wilds of NZ, his home country, including: a year in wilderness huts, a year driving off track to various forest campsites and a year walking Te Araroa (the 3000km hiking trail that runs from one end of NZ to the other).

It's an incredible story, about what we are capable of, how far we have drifted from living natural lives, the mental as well as physical challenges of living wild, and she and Peter are deep-thinkers; some of the most interesting bits are about their relationships to their surroundings and to each other.

*
It seems I do love talking about books. Who knew? Now it's your turn. What books have you loved lately, non-fiction or fiction?