Last week I did something that wasn't very no-impact: I flew to Sydney for the day. After weighing up the pros and (carbon) cons, I decided it was worth it. And it totally was, because it was one incredible, inspiring day. 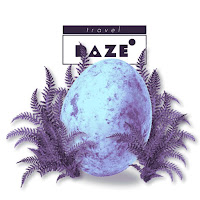 Called TravelDAZE, this annual TEDx-style event is run by Travel Weekly and this year the theme was Sustainable Travel. So of course I had to go.

Oh, and one of the 21 speakers was Bob Brown. (If you're not Australian or don't know about this environmentalist and former senator and Greens leader, introduce yourself at bobbrown.org.au. I'll wait here.)

Walking the talk
It was great to see TravelDAZE walking the sustainability talk. For instance: it was held at the NSW Teachers Federation conference centre near Sydney's Central Station so there was easy access by public transport. Pre-event emails asked everyone to bring their own reusable water bottles (there was filtered water on tap) and coffee cups.

There were also free Frank Green coffee cups, which are beautifully designed, recyclable, leak-proof (great for travelling) and made in Australia. (Too bad they're plastic, but I'd brought my own cup anyway; Frank Green also makes ceramic-steel cups).

The only printed materials were our name tags. Registration was done electronically. There were no promotional gifts (refreshingly unusual at travel events). And lunch, prepared by local caterer Relish Foods, was amazing: healthy, vegetarian (with two options for meat-eaters) and served in compostable bowls with corn-starch cutlery.

Why isn't every conference as creatively sustainable as this?

The stage was set for an epic day of short talks averaging 10-15 minutes each with a couple of longer keynotes. Here are a few snippets that inspired or resonated with me.

Good things are happening
The main takeaway from the day was that travel companies are increasingly committed to doing good - reducing their environmental impact, protecting human rights, reducing animal cruelty, promoting gender equality, giving back - in a multitude of ways.

A few standout examples, that go way beyond banning plastic straws and asking guests to reuse hotel towels, from a day that was positively bursting with them:

Low-carbon travel
Darrell Wade, co-founder of Intrepid Travel, kept it real when he was asked about the future of sustainable travel. It's bright, he said - and bleak. In terms of travellers wanting to minimise their impact and travel companies stepping up to be more sustainable (see above), he's hopeful.

"The tourism industry, as much as we've got a big question mark over our heads for carbon emissions, in terms of the benefit to the world in the money we spend and the cultural bridge we make and the peace dividends, what our industry delivers is huge," he said, before talking up the value of "undertourism" (visiting countries that don't get many visitors).

About those carbon emissions... When it comes to aviation, the future is "pretty bleak". Although flying gets about one per cent more efficient every year per passenger-mile, aviation is growing at about 4.5 per cent a year "so the impact of aviation is getting worse every year... and biofuels may never be economically viable." It's travel's inconvenient truth, Wade said.

What can be done? Travel companies need to address the carbon emissions of flying when designing tourism products. "In our case, Intrepid has a legal presence in about 40 countries and traditionally we've always thought of each country as either an outbound market [such as Australia, the US or England] or an inbound market like Vietnam or Peru or Kenya. As time goes on, I think we'll have to flip that on its head," he said, by offering lower-carbon products in domestic markets. "We'll increasingly have to have a lower carbon structure built into tourism product at a global level."

Small is beautiful
There was much talk about big goals, specifically the UN's 17 Sustainable Development Goals, which include "Climate action" and "No poverty" by 2030. We also learned about small, grass-roots projects and partnerships making a difference.

Then there's Planeterra, a not-for-profit launched in 2015 by G Adventures to help communities around the world benefit from tourism. After reaching its target of "50 [projects] in 5 [years]" 18 months early, it now has a new target, Project 100: to support 100 local enterprises by 2020. Now that's big.

Bob rules, ok?
My personal highlight of the day was seeing Bob Brown, who gave the keynote address. He might have retired from politics in 2012 but he's still as passionate as ever, his words a stirring call to action about the urgency of protecting the planet and Australia's wild natural places.

He credits his mum with instilling in him a respect for nature: "I was first hit by conscious awareness at Trunkey Creek, between Bathurst and Goulburn [in central NSW]. My dad was the local policeman, my mum had come off a dairy farm and she said, 'Whatever you do, look after nature' and it's been with me ever since."

He talked about his credo for nature-based tourism, the disastrous Adani coal mine in central Queensland, the climate emergency - "We're in the greatest crisis of human time. It's not coming. We're in it." And his ethos: "Don't get depressed, get active."

To illustrate the importance of protecting national parks and World Heritage Areas, he showed us pics of some of his favourite places - Flinders Chase National Park on Kangaroo Island (South Australia) and Federation Peak, Frenchman's Cap and the South Coast Track in Tasmania - all at risk from private tourism developments, which should be built on private land, he said.

"National parks should be for the public, the infrastructure should be publicly paid for and amenable to everyone equally," he said.

His last words: "It's a beautiful planet, we're a beautiful species, [but] we need to turn around this ship of state so that our children, our grandchildren and everybody who is on this planet after us will thank us for being here."

Costa is a force of nature
Gardening Australia host and TV personality Costa Georgiadis livened up the post-lunch time-slot with his show-and-tell (instead of a "what do you call it, Powerpoint!" presentation).

He also showed off his reusables (apparently he hasn't used anything disposable for 28 years): a stainless steel water bottle, a reusable coffee cup, wooden cutlery, even a Boomerang Bag! "Free the leaf!" he said, holding up a glass jar of tea leaves he uses instead of tea bags. "Say no to convenience!" See Travel Weekly's story for more on what Costa said.

The Lion's Share
The day ended on an upbeat note: filmmaker Christopher Nelius talked about The Lion's Share, a Sydney-based initiative launched in September last year to "change the world through advertising."

For 150 years we've been using animals to help sell products, Nelius said, to convey messages of cuteness, security, innocence, belonging. "But there's a disconnect. We can put a tiger on a cereal box, but real tigers in the wild are in trouble." And not just tigers but rhinos, koalas, orangutans, snow leopards...

The Lion's Share helps advertisers "give back" by voluntarily donating 0.5 per cent of what they spend on advertising every time they use animals (even cartoon animals!) in their ads. Last year, $US591 billion was spent on media globally; 20 per cent of those ads used animals. Backed by the UN Development Program and Mars Inc, The Lion's Share funds wildlife conservation, habitat restoration and animal welfare projects. They're aiming to raise $US100 million a year within three years.

Sir David Attenborough is even behind it, as a Special Ambassador, and has called it "a profoundly game-changing initiative".

What better way to end a thought-tornado of a day of inspiration and positive action?

Big thanks to Daisy Melwani at Travel Weekly - and event sponsor G Adventures - for the media ticket to TravelDAZE this year and to all the speakers for sharing their hard-won experience. So inspiring, invigorating and empowering. I learned a lot. Now to plant more trees to carbon-offset those flights...