2040: The most inspiring book you will read this year (or ever)

This time last week, before the delegates at the UN Climate Action Summit in New York sat down to talk about solutions to the climate crisis, before they even heard Greta Thunberg's powerful "How dare you" speech, they watched a few clips from an Australian movie.

2040, a documentary released earlier this year and directed by Australian filmmaker Damon Gameau, was projected onto the walls of the stately UN General Assembly Hall and introduced by lead Paris Agreement negotiator Christiana Figueres. (It was screened in full at the UN Youth Climate Summit later in the week.)

If you haven't seen it, this eco-doco is a fascinating fast-forward glimpse at a best-case-scenario future Earth.

Inspired by the birth of his daughter Velvet, Damon (best known for That Sugar Film) spent three years visiting 14 countries and interviewing hundreds of scientists and other experts about innovative ideas and technologies that currently exist (no pie-in-sky stuff allowed) to present an intelligent guess about how life on Earth could be 20 years from now.

He offset all his travel emissions, by the way, with carbon credits and by planting a small forest in northern NSW near where he lives with Velvet and his partner Zoe. And because one of 2040's partners was Intrepid Travel, a carbon-neutral BCorp I often work with, I was invited to help plant some of those trees - which will hopefully sequester 90 tonnes of CO2 by 2040.

Here's something Damon said that chilly winter's morning when we were all taking a break, which neatly sums up the film's ethos:

"If you go beyond that dominant discourse in the media, there's hope everywhere. It's everywhere. The spotlight is on this tiny little part of the stage, but if you look in the shadows and the wings, there's magic happening. So we need to get that spotlight THERE and get people to be inspired by what is actually going on."

Now 2040 is a book too, a beautiful 300-page "Handbook for the Regeneration" and it's hands-down one of the most inspiring reads I've had in a long time.

I borrowed it from my local library and was so tempted to dog-ear pages and write in the margins and underline poignant quotes and interesting stats and handy tips that I'm thinking of buying a copy to keep and keep referring back to.

The book opens with a tear-out (I resisted the temptation) Household Checklist, 13 simple things we can all do to reduce our impact right now, such as: grow your own food (growing a kilo of veggies sequesters 2kg of emissions) and change your search engine to Ecosia (done! Ecosia uses ad revenue to plant trees for online searches).

After a foreword by Paul Hawken, founder of Project Drawdown, 2040 is divided into sections about Energy, Transport, Drawdown & (carbon) Sequestration and Consumption. 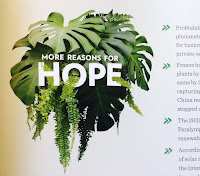 Each section ends with "More reasons for hope" about sustainable things happening all over the world, and suggested things we can do now to help in our homes, offices and communities.

There's info on carbon-sequestering foods, environmentally friendly fabrics (hemp and linen are top of the clothes heap), "environmental dashboards" being installed in communities to give live feedback on energy consumption, and how to envision the Earth as a doughnut (to understand how climate solutions benefit everybody).

Some of the best quotes come from Paul Hawken, particularly in relation to Project Drawdown, which has been developing a map of the top 100 solutions to reverse global warming - such as empowering girls and women, reforestation, reducing food waste, regenerative agriculture, solar farms and plant-rich diets.

It's all so easy to read and gorgeously put together with plenty of colour images and illustrations and quotes from some of the 80 children Damon interviewed in various cities around the world, all aged between six and 11.

There are interesting stories about everything from the origins of Monopoly to Earth Overshoot Day in various countries (Australia uses its share of the world's resources by March 31 every year, apparently), as well as insights into how things went awry in the first place.

My favourite bits were about the rise of regenerative agriculture (eight of the top 20 solutions to the reverse global warming are food-related, apparently) and the "seaweed solution" - which Damon calls "the simplest, cleanest, least political and most inspiring" he'd seen on his whole 2040 journey.

Here's his educated rave about it:

"If I told you that this one solution could potentially draw down staggering amounts of carbon, restore marine ecosystems, provide enough seafood (brimming with healthy omega-3 fatty acids) for 10 billion people... cool the waters over coral reefs to help prevent bleaching, plus provide a material to make plastics and clothing, feed cattle to dramatically reduce methane emissions and provide a biofuel for energy, you'd probably say, 'This sounds like some Silicon Valley, Elon Musk-funded, Richard Branson award-winning miracle.'

The book ends with 50 delicious recipes, and cooking tips, based around ingredients that sequester carbon and replenish the soil - how many cookbooks do that?

Like I said, inspiring. 2040 is a book everyone should read, really. Pass it on. Tell your friends about it, buy a copy and share it around, ask your local library to order a few copies so more people can read it.

It's all about the collective consciousness: the more of us thinking this way, the sooner this Earthship of ours will set a new course for a brighter, healthier future for us all.

Big thanks to Intrepid Travel for the movie ticket for 2040; Intrepid also gave free tickets to school students all over Australia on 2040's opening weekend earlier this year. 2040 is now available for community and school screenings and the What's Your 2040? website has clips from the film as well as plenty of sustainable living tips.