I've just finished reading John Steinbeck's Travels with Charley, an allegedly non-fiction account of the almost-three months he spent driving across America in 1960 with his eponymous poodle, in search of the soul of his country.

Steinbeck was 58, had been living in Europe, then New York, which isn't really America, and wanted to reacquaint himself with the people and places he'd once known so well. So he packed up a truck with a camper on the back and started driving. Just like that.

It's a beautiful read, brimming with insights about travel from the very first page:

"When I was very young and the urge to be someplace else was on me, I was assured by mature people that maturity would cure this itch... Nothing has worked. Four hoarse blasts of a ship's whistle still raise the hair on my neck and set my feet to tapping. The sound of a jet, an engine warming up, even the clopping of shod hooves on pavement brings on the ancient shudder, the dry mouth and vacant eye..."

Steinbeck didn't think much of trip-planning, but the world has changed since 1960 and so have we.

Even the most naturally nomadic among us still look to others, talk to others, for inspiration and ideas, in person and online. If I had a dollar for every time I've been asked, "So what's your favourite place?" I probably wouldn't be writing this post in a few scrounged minutes between deadlines. 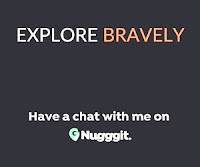 But I want to give a shout-out to Nugggit, a new travel advice platform launched today, the first of its kind to connect travellers with travel writers.

It works like this: travellers peruse the website for someone who has been or knows about where they want to go next. Then they contact the travel writer - by chat messaging - to get some tailored, thoughtful travel advice, for a small fee. (See How it works for more info.)

It's win-win: the traveller gets independent, unbiased travel information from a real person who travels for a living; the travel writer supplements her/his income and can be reached anywhere in the world.

Like all the best things, it started with a simple, personal quest: Henry Talbot, an adventurous Brit now living in Sydney, wanted to take his sons fly-fishing in the mountains. Since then, the idea has grown like a sea-monkey well beyond family travel while staying close to its roots.

As Henry puts it, it's all about "helping people get the information they need to explore bravely".

There are more than 200 travel media professionals in 70 countries on Nugggit so far (including yours truly; here's a link to my profile), with expertise in more than 600 destinations. That's a lot of travel know-how.

And the name? It's a variation on "nugget", something small, natural and precious because, as Henry says, when you're planning a trip, thinking about where to go and what to do, "often it's those small nuggets of advice that encourage exploration off the beaten track, where to turn left when the crowds turn right".

To celebrate today's launch, the first 50 contacts are free to you, the traveller. (Travel writers will still be paid, by Nugggit.)

Steinbeck would be proud. Happy exploring.