Earth Weekend: 13 natural things to do on Norfolk Island

This time last week, I was driving around Norfolk Island in a flapping tent. At least that's how it felt in my rental Mini Moke (for the uninitiated, that's a small jeep). I loved it.

I was there to find out about outdoorsy things to do on this small Australian island, but I didn't expect getting around would be one of them.

I'd hoped to do Earth Hour there, even packed a beeswax candle. That didn't happen; there didn't seem to be any Earth Hour events on, so I joined a lantern-lit ghost tour of Kingston, the island's eerie convict settlement.

But I ended up having an Earth Weekend instead, because Norfolk Island is one of the most natural, and naturally beautiful, islands in the South Pacific.

How could you not love a place whose emblem, which flies proudly on its flag, is a tree? None other than the Norfolk Island pine, which is all over the island (the main township is even called Burnt Pine), except on the bits that are rolling green hills.

In fact from the air -- Norfolk is a two-hour flight from Sydney and Brisbane, an hour and a half from Auckland -- it looks like one big dairy farm in the middle of the sea.


Forget about the 100-mile diet. On Norfolk you can have a 100-metre diet. It's ridiculously easy to "eat local" there.

All its fruit and vegetables are grown on the island, which is just 5km by 8km. There's locally caught fish, local beef and fresh milk of course, but also coffee, goat's cheese (from The Hilli Goat), even wine (from Two Chimneys winery).

Everyone drinks rainwater (aka "cloud juice"), which comes straight out of the tap.

Best of all, the island is a nature-lover's playground. Here's my list of the top natural things to do on Norfolk Island:


1. Swim at Emily Bay. Unlike Lord Howe Island, which is also about two hours from the east coast of Australia, Norfolk doesn't have many beaches. But it makes up for that with Emily Bay, a perfect crescent of white sand that wraps itself around a bay of gin-clear water. There's even a floating pontoon you can swim out to, Mediterranean-style, and green grass shaded by towering pines to relax under.

2. Breathe fresh air - or buy some. If you're there on a Sunday, head to the craft market outside the Tourist Information Centre where you can buy a tiny corked bottle of fresh island air for a couple of bucks. Priceless.

3. Snorkel Slaughter Bay. It's hard to imagine a less inviting name for this low-tide snorkelling spot on the island's south coast, but this lagoon hemmed in by coral reef has a dazzling array of marine life. I snorkelled there one afternoon with Karlene Christian, a diver and Norfolk Islander (they don't call themselves Australians), who picked "sea grapes" that we ate in a salad of lime-cured kingfish on the beach afterwards. Best post-swim snack ever.

4. Walk the coastal cliffs. On the north coast, about 20 minutes' flapping drive across the island, I spent a scenic couple of hours walking along a cliff-hugging track looking down on Twelve Apostle-like islets such as Bird Rock and a rock pool called The Chord and didn't see another soul - on a Sunday! (Only about 1600 people live on the island.)

There's also a half-day guided trek on Phillip Island, 6km off the south coast, said to be amazing, but the seas were too rough to get to the island when I was there. 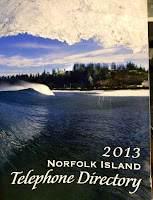 5. Go surfing. Speaking of rough seas... Norfolk isn't an easy place to surf, there being no surf shops or surf schools. The trick is to find a local who can lend you a board and show you where to paddle out. I found two: Emily (who runs the Hilli Goat Farm) and Zach (a surf photographer), who took me surfing at Bumboras early one morning. The waves were wild, and the board not quite what I'm used to, but it was one of my favourite experiences of the trip, a glimpse of islander life.

6. Have a picnic. Driving around, you'll see roadside produce stalls, with honesty boxes (and bananas for 10c!). Or Island Nectar can put together a hamper of sustainable and traditional island foods (think smoked kingfish, goats cheese, guava paste) you can take to any of Norfolk's beauty spots, maybe Emily or Anson Bay or Rocky Point.

7. Go foraging. Food isn't just grown by human hands on Norfolk; it's growing wild by the road, in paddocks, beside streams. I spent a delightful couple of hours with chef-historian Rachel Nebauer-Borg picking guavas, wild spinach and watercress on one of her foraging tours.


8. See natural art. A small gallery on the main street opened last month: Norfolk Art, which showcases Adam Jauczius's beautiful paintings of Norfolk's natural side, its pine trees and beaches and coastal cliffs. You can even pick up a print or a few postcards, for souvenirs and to support a local artist.


10. Buy a Boomerang Bag. Like other forward-thinking places around Australia, Norfolk Island has free reusable cloth bags for shoppers to use, to reduce plastic bag use. Buy one at the airport for a great sustainable souvenir.

(They're called Boomerang Bags because ideally you bring them back to the shop where you got them, on your next visit. It's a worldwide movement that started in Australia; Boomerang Bag HQ is at Burleigh Heads. See boomerangbags.org for more info.)


11. Hug a Norfolk Island pine tree. It's almost impossible to snap a photo on Norfolk Island without one of its endemic pine trees being in it. These trees have made themselves right at home up and down east coast Australia, but they all came from here. And how cool is this: it's an island tradition to plant 100 pine trees for every islander who lives to 100; there have been three so far, all women.

12. Look out. Norfolk has more than its fair share of lookouts. Two of the best are Mount Pitt, where you can get a 360-degree view of the island; and Captain Cook lookout (Cook was the first European to spot the island, in 1774) where you can sit at the cliff edge watching terns, boobies and tropicbirds ride the updrafts.

13. Rent a Moke. You need a car to get around Norfolk and car hire is often included in accommodation rates. Why not make it a Moke? They might not run on biodiesel but they're the epitome of simplicity: no locks, no electric windows (no windows!), no power steering. Just hop in and feel the wind in your hair.


And I haven't even mentioned swimming in sparkling natural rock pools, sea kayaking along the coast, twilight walking tours or star-gazing (excellent because there's little light pollution) -- none of which I got to do this time. Which is a good thing. Now I have another reason to go back.

Big thanks to Norfolk Island Tourism and Air New Zealand for a work trip that almost felt like a holiday.