This week’s electricity-free night (which we now call EFN in the hope of making it a permanent thing, beyond this no-impact month), we decided to do more than stay home and play Scrabble by candlelight. And because it was the start of the Easter break, we decided to do a low-impact camping trip. 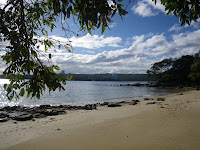 I'm lucky to live in a part of Sydney that is super-natural, so to speak. It’s a five-minute walk to Fairlight Beach, where you can swim or snorkel for much of the year; it's less than five minutes by bike to Manly – yesterday morning, in fact, we rode down, parked the bikes and swam to Shelly Beach (about 1km); lots of fish (a blue grouper even nibbled Craig's toe) and the water's still 23 degrees (that's Celsius, in late autumn!). I can also walk out my door and be in Sydney Harbour National Park within 30 minutes, where there are tiny beaches you can have all to yourself on weekday mornings, and some holiday weekends too...
So, yesterday afternoon, Craig and I packed our backpacks with dinner supplies (organic pasta and vegetarian sausages, home-made pesto from the neighbour’s basil plantation, organic cranberries, chocolate), sleeping bags and mats, and some of the beeswax tealights we’d made last weekend, as well as a wind-up torch (our head-torches were off-limits because they need electricity to recharge the batteries) and Craig’s solar-light hat (it charged itself as we walked!). 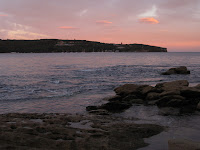 We set off from the house after lunch and were at our favourite beach by 3.30pm. It was a still, warm evening. We boiled up some water (on my Trangia camping stove, which runs on methylated spirits, a relatively eco-friendly, ethanol-based fuel made by fermenting plants such as sugar cane) and we had tea and chocolate on a flat rock by the water, watching yachts motoring to neighbouring bays for the night, the lights coming on in Manly, the evening sun-show (with apologies to Joni Mitchell's  "sun-show every second” in Chelsea Morning). 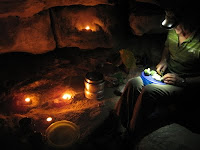 Then we, well Craig, made dinner under a rock overhang; our candles flickered on the sandstone walls beside and above us. It’s one of the loveliest meals I’ve ever had.
It was still light enough to see when we made "camp" (minus a tent) on the sand, as the stars came out and the tide crept in, and in. Lightning lit up the clouds in explosive bursts. Mozzies buzzed. After playing word games from the cosiness of our sleeping bags, we realised we'd soon be underwater if we stayed there, so we relocated to a higher part of the beach. Then the moon came up, bright as a light.
I didn't actually sleep much – what with the moon-light, the mozzies, the rustling sounds in the grass near our heads (water dragons on the prowl?). But it felt like a little adventure. Especially when the rain started – so softly at first we thought it might stay away...until the heavens opened. There was nothing for it but to stuff everything in our packs - "fast!" as Bear Grylls might say - and head for home. 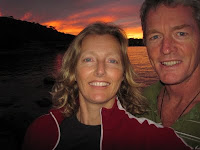 That was the second-best bit of our "camping expedition": walking along bush paths in the pre-dawn darkness and the pouring rain, soaked to the skin (I'd brought a raincoat and we had pack-covers but the rain trickled in everywhere), no one else around. A creek under a footbridge we crossed had already become a noisy waterfall. Just after 6am, we got back to the house, warmed up with tea, then fell into bed and a deep sleep. When I woke up almost three hours later, I wondered if it had all been a dream. But we've got the pictures, and the mozzie bites, to prove otherwise...