Last night's electricity-free experiment turned out to be fun. It was like camping, with comforts and your own bed.
After going around the house turning off everything at the wall: laptop, printer, lamps, wireless router, television and DVD player, even the phone (I’m thinking of re-instating our old analog phone, if I can find it; it doesn’t take messages but it doesn’t use electricity either), we cooked by candlelight, watching the blue gas flames flicker. The house was silent – except for the fridge, which droned on.


Whenever I went into a room that wasn’t lit, I had to find things by feel. I carried a candelabra with me when I went to the bathroom. Because things were shadowy, I walked more slowly than I usually would. I felt my body sighing, relaxing into this. 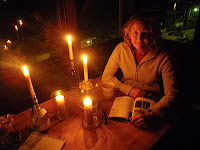 In No Impact Man’s book, Colin’s wife Michelle said having no electricity felt like a vacation, and I agree. Without electric lights or the television, the night seemed long. My boyfriend and I played scrabble, then read books for a couple of hours by the glow of the candle flames until sleepiness (instead of the end of the TV program like on other nights) told us it was time for bed.