Organics and the crowd factor

Well, dear readers, we made it to the end of week one of the No Impact Project. It's too soon to really say how it feels but it is changing the way I think and do things. On Saturday, for instance, my boyfriend and I went to the organic market down the road, for the first time ever. After the Food Co-op experience of last week, I was hoping we'd find an easier way to buy organic and local. And we did, sort of.

Saturday morning, we rode our bikes to the local public school where the market is held every Saturday morning, gathered organic produce (broccoli, beans, cranberries, muesli, lettuce, tomatoes, nuts, and a beautiful loaf of organic walnut sourdough bread), took it all to a man behind a set of scales, who weighed each item and tapped the costs into a calculator then gave us a total: $66.50. For a week’s worth of organic veges, yay! We didn’t have enough cash and they don’t do eftpos but no worries: they said we could pay next Saturday, or pay by direct deposit (another guy wrote down their bank details on the back of a brown paper bag). So friendly, so easy. And because we were on our bikes, they delivered the veggies to our house while we were out that day…

All the produce comes from up and down the east coast of Australia, so it's not technically "local" (as in the 100-mile diet) but it's not imported from other countries either. The other benefit is that there's no packaging.

One thing I'm finding about the No Impact Project is that you can't focus on one issue for a week, then move on to the next issue. Because, as I’m discovering, all the “no impact” issues overlap and are entangled with each other. Buy organic produce from a market and hey presto, you’ve reduced your packaging too (because things aren’t pre-packaged). Ride your bike to the market and there’s emissions-reduction going on as well. Don’t pass any other shops on the way to the market (because there are none, only houses, the market being in the grounds of a local public school) and you’re reducing consumption too.

Later that day, we caught the ferry to the city: emissions generated but shared between 1100 passengers, so I figure that was ok, and anyway we were going to a rally near Central Station organized by GetUp!, Australian Conservation Foundation, Greenpeace and Australian Youth Climate Coalition in support of a carbon tax, as a start in the move towards Australia having a greener economy based on renewable energy. There were more than 8000 people there, a heartening sign. 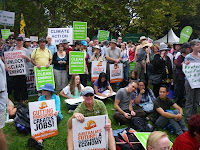 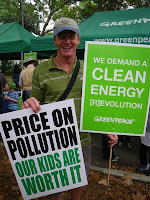 The reason for the rally, and the reason it was organised in only a week, was that there was another rally on the other side of Sydney, organised by people opposing the carbon tax, doubting the reality of climate change.


To those people, I’d like to repeat here what Professor Andy Pitman, director of the Australian Research Council’s Centre of Excellence for Climate System Science, said in response to Cardinal George Pell, who questioned the reality of climate change:


“It’s odd,” said Professor Pitman. “Legally, I need a licensed electrician to change a light switch. I need a licensed plumber to do my plumbing. My solicitor needs a law degree. A Qantas pilot needs a licence. If I see a doctor, they have to have a qualification and if I see a surgeon, I want one that has loads of on-the-job experience, not one that has merely written a website.

“Yet in climate science, which is about as complex as any area of science, you can apparently be qualified if you have read some blogs. My question to Pell would be: ‘Which papers in Nature, Science, Journal of Climate, Journal of Atmospheric Science, International Journal of Climatology – say in the last decade – does he find contrary to the consensus that humans are primarily responsible for global warming over the last three score years and 10?’ There are none, by the way. Proving humans have not caused the warming over the last half-century would win you a Nobel Prize. The reason there are no papers proving global warming wrong is because there is simply not the vaguest hint that it is.”

Well said, professor. Now can all just get on with figuring out what to do about this global issue? As Marshall McLuhan once said, "There are no passengers on Spaceship Earth. We are all crew."