The deeper I get into this project, the bigger it seems. Just trying to read what others have done to live simpler, eco-friendly lives is a full-time job (or would be if I didn't already have a job). What's more, everything environmental overlaps and is interconnected. And is connected to other stuff: kindness, awareness, community-mindedness, economics...
So, while I'd intended this week to be about reducing waste, even going zero-waste,  in reality there are several issues going on concurrently and I’ve been thinking about packaging, rubbish and recycling for two and a half weeks already. One of the things I love about having a project like this, though, is that it makes you see things – the way you live, the things you do, the products you buy, where to shop, how to spend your time – through a different lens, which has the side-effect of making you pay attention to what you’re doing.
Last night, for example, it was my turn to cook and I found myself deciding between having noodles (in plastic packaging, bought before this experiment) and rice (no packaging because bought from food co-op but uses electricity for the rice cooker) – I chose rice because we’re focusing on waste this week.
To get down to the nitty gritty, Suzuki’s Green Guide, by Canadian environmentalist David Suzuki and David Boyd, suggests a few ways to achieve zero waste:
Back to recycling. My local council, Manly, began a Zero Waste strategy in 2005, with the intention of having zero waste by 2015 so they have lots of measures in place. There's a regular e-waste collection for computers, televisions, etc - so they are recycled and their parts re-used. The council picks up old fridges. Plastic recycling is now more efficient than ever: apparently any plastic that holds its shape is recyclable (so the external packaging on a packet of Mint Slices are trash-bound, but the little trays inside are recyclable, joy). And recycling can be fun – have a look at this clip a friend sent me about recycling, flashmob-style.
The not-so-good news is that a lot of things we think are being recycled are really being "downcycled": so plastic bottles get made into lower-grade plastic bottles and other things, again and again, until eventually the plastic is so low grade it can’t be made into anything else and must be thrown away. And then it keeps deteriorating until it breaks into bits that eventually find their way into the oceans to create such monstrosities as the Great Pacific Garbage Patch so small that marine animals and birds end up eating it. 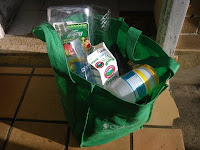 Last week in just two days, the two people in this household created a shopping bag full of recycled plastic, (organic) milk cartons and glass bottles. To be fair, we were cleaning out the cupboards (when I say we, I mean Craig) and getting the house ship-shape, but still, it's quite a lot.
So this week, we're going to try to go zero waste (minus compost and recycling). And make positive impacts such as picking up rubbish wherever we go (without being flashmobbed, hopefully). Of course much of what we're using today will be thrown out months or years from now, but for now, let's see what we can do. I'll keep you posted (with this paperless postal service we call the internet)...